96. PAUL F. VERHOEVEN - A Short Chat About a Short Trip

This time we speak with Aussie writer Paul F. Verhoeven, who has contributed the story "Fear of Flying" to the set.

We find out some of Paul's history and talk about his long-term fandom, especially of Big Finish, and how he got the writing gig in the first place.

Our strong suspicion is that this won't be the last we hear from Paul.

February 2022 sees the 20th anniversary of the release of one of the most popular and loved audio dramas to ever come out of Big Finish Productions, The Chimes of Midnight by Robert Shearman.

To celebrate, we are joined by guest Todd Beilby from Australian Doctor Who podcast Flight Through Entirety to discuss and reminisce about the story and what it was like to be involved in fandom through the 90's and during the period that the 8th Doctor and Charley adventures were being released as brand new Doctor Who seasons.

We also feature the very first Sirens of Audio quiz with Philip and Todd going head to head to claim the inaugural title. Who will claim victory?

Then we feature an interview with three members of the guest cast for The Chimes of Midnight, Lennox Greaves, Sue Wallace and Robert Curbishley. What memories will they have from the recording of this classic episode?

Finally, we discuss the new release Doctor Who: Charlotte Pollard, The Further Adventuress and compare this special anniversary release to the classic run.

Get out of the scullery, grab some plum pudding and join us in celebrating this incredible story and unforgettable TARDIS team.

94. The Worlds of PETER ANGHELIDES

Writer and producer Peter Anghelides joins us to talk about how he started in Doctor Who fandom, where his writing career started, and the story behind him starting to write for Big Finish. We also discuss his most recent project, a trilogy of boxsets for The Worlds of Blake's 7 range.

Doctor Who: Perception Filter - Written and read by Dwayne Bunney

Doctor Who - Perception Filter by Dwayne Bunney
Two siblings mourn the loss of their mother. But not because she was a good person. No one else sees her in the same way as they do. Until a little man in a book store coffee shop gives them the chance to discover the answer the question that can no longer be answered. Who really was the monster that became their mother? This is an unofficial story set in the Doctor Who universe and made for fun. It is not, nor will ever be monetized.
at 2/13/2022 10:46:00 AM No comments:

93. BONNIE LANGFORD - Puttin' On The Glitz

Our very special guest for this episode is the lovely Bonnie Langford, known to Doctor Who fans as Mel, companion to the sixth and seventh Doctors in the late 80's.

Bonnie has been performing for over 50 years and we discuss her time in theatre, her transition from child to adult actor, how she has been dealing with being an actor during the pandemic, and of course, her audio Doctor Who work with Big Finish.

Watch and Listen on Spotify or Your Favourite Podcast App

Joining us this time is Big Finish Third Doctor himself, Tim Treloar. We talk about his acting career, how he first came to Big Finish, and who exactly was responsible for noticing he sounded remarkably like Jon Pertwee. 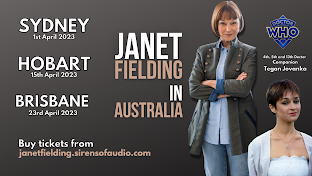