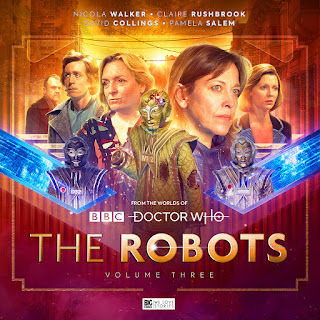 If you enjoy conspiracy, suspense and mounting threats, then The Robots Volume 3 will not disappoint. The Robots is a 12-part series that takes place on Kaldor during a one-year sabbatical from the TARDIS by eighth Doctor companion Liv Chenka. She uses this time to catch up with her sister and discovers that her home planet has turned into far more than she ever bargained.
Once again there are three diverse stories that continue to drive us to what promises to be a massive conclusion in which Liv may only just get away with her life.
The first story “The Mystery of Sector 13” by Robert Whitelock continues to build on the role the Sons of Kaldor are going to play in the future and for Liv’s sister, Tula, her eyes further opening to the worrying happenings inside the Company. Whitelock is better known for his acting talents within Big Finish but with this script he is able to create a lot of tension. He creates a clever way to knock the confidence out of Liv and Nicola Walker seems to relish in flexing her acting muscles. His use of the Robots is both heroic but also leaves us feeling nervous.
“Circuit Breaker” by Guy Adams will probably be the fan favourite for those who love the Doctor Who episode this whole world is based on, The Robots of Death. Liv and Tula are not in this episode and the central stage is given to Poul and Toos. David Collings and Pamela Salem reprise their roles brilliantly as they did in one episode from the previous box set. Poul is called in by Toos to investigate a murder and this is going to play out a lot closer to home than either one will want. Guy Adams tells the story in a brilliant way overlaying information and returning back to scenes time and time again, revealing more information each time. And the conclusion is quite shocking and unexpected. At this time we don’t know whether David Collings has recorded any further stories. If he hasn’t this is both a great story to finish with but will be forever frustrating to not see where this was going to lead.
The final story in the set is “A Matter of Conscience” by Lisa McMullin. This is the most grand and epic story in the set involving huge set pieces, crowds and explosions. Lisa has become a real blessing to the writing team of Big Finish having written a lot of fine stories in a short period of time. In this one she writes engagingly about politics, terrorism and misinformation. She also gets to reintroduce a character from the television show that wasn’t expected.
It is great to have Louise Jameson given directorial duties again. A sensational actress, Louise is able to turn her own abilities to help the cast extract the most from their lines. The bounce that the characters have off each other and the enjoyment that can be felt is no doubt due to the talents of Louise. This is all the more amazing considering all this was achieved during lockdown. It is great to have a production with female leads, a female director and at least one story by a woman but telling a story that is totally accessible to any gender. There are strong relationships and emotion throughout the story but more than enough bangs and flashes to keep the most die hard people entertained.
The whole cast are great but the two leads, Nicola Walker and Clare Rushbrook, continue to hold the power in every story. You would swear these two women truly are sisters by the way they interact with each other. Nicola’s dry humour and Clare’s never ending patience and trust contrast beautifully together. Two great actresses playing two great women.
And finally, the Robots of the title. Each time the Robots speak it creates memories of one of the best stories the fourth Doctor ever had. And throughout the stories they play slightly different roles and are ever more confounding. Are they basic helpers? Are they moral beings? Are they growing in understanding and knowledge? Are they helper or destroyer? Each set of stories creates more questions and builds anticipation of how this is all going to end. Though when it does end, I think that will be the tragedy.
You can purchase The Robots Volume Three directly from the Big Finish website in either download or CD collectors edition.
Philip Edney
at 12/22/2020 08:00:00 AM No comments:

Our guest is the very talented Lizbeth Miles, author of one of the December 2020 Big Finish monthly range releases, The Grey Man of the Mountain, and co-host of the Verity! and Hammer House of Podcast podcasts.

Liz chats about her love of classic Who, her history with Big Finish, and how she feels about writing the last ever 7th Doctor audio play in the monthly range.

She apologizes in advance.

Big Finish trailers featured in this episode were for the following audio plays, available to purchase from the Big Finish website:

Doctor Who: The Grey Man of the Mountain by Lizbeth Miles

Doctor Who: The Plight of the Pimpernel by Chris Chapman

Liz recommends Doctor Who: The Chimes of Midnight and the Verity! podcast episode that contains a review of said story but does not contain Liz.

Bloopers and Outtakes From Episode 36 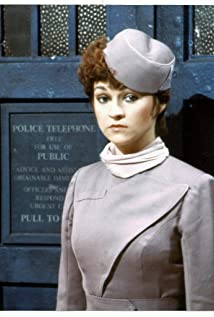 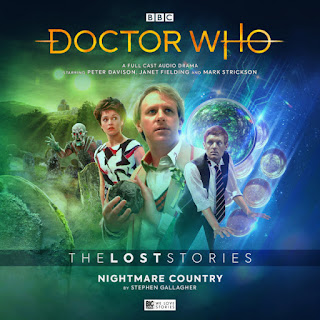 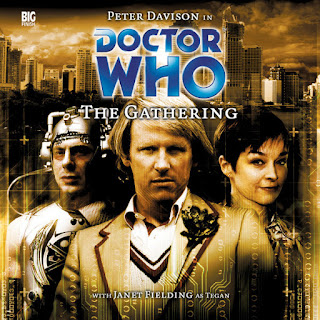 In this episode we are joined by Big Finish author and fellow Who Podcaster, Paul Morris.

Paul has written for many Big Finish ranges including Doctor Who, Jago & Litefoot, The Adventures of Bernice Summerfield, The Scarifyers, Tales From New Earth, The Avengers & The Paternoster Gang to name a few.

Before we get to his writing, we discuss the controversial contents of The Talons of Weng-Chiang and the broader topic of cancel culture.

During our chat, we played the trailers for the following audio adventures (please click of the titles to check out more detail about them):

The Diary of River Song Volume 6 (which includes Paul's Talons of Weng-Chiang prequel, The Talents of Greel)
The Scarifyers 2: The Devil of Denge Marsh

Doctor Who - The Companion Chronicles: Council of War

Doctor Who: Tales From New Earth (which includes Paul's story, The Skies of New Earth)

The Avengers: The Comic Strip Adaptations Volume 02: Steed & Mrs Peel (which includes The Antagoniser by by Paul Morris and SImon Barnard)

Paul currently appears on the Doctor Who: Missing Episodes and Something Who podcasts.

We discuss two of Big Finish's scariest stories according to our opinion and the popular vote.

Philip recommends Something Who (podcast)