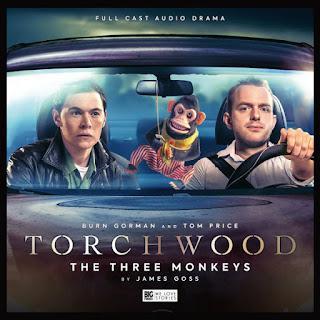 Big Finish have tried larger scale Torchwood audio drama, but it's here in the smaller cast plays that it seems to shine. Characters get their moment much more than they ever would if the whole Torchwood team and a large guest cast were featured.

That's part of what makes this month's Torchwood: The Three Monkeys, so special.

Tom Price and Burn Gorman seem to be having a ball reprising their roles. Lockdown and remote recording has in no way dampened their enthusiasm for the job.

But despite the humour and good rapport between the characters, we still have the dark tragedy of Owen's "living death". We also learn of a massive tragedy within Andy's family.

Writer James Goss handles the human story, the comedy of the "No Activity" style car setting and the ensuing action very well as is common with his writing.