Volume 5 of The First Doctor Adventures is OUT NOW

All the world’s a stage in the fifth volume of Doctor Who – The First Doctor Adventures, two brand new full-cast audio dramas released today from Big Finish Productions.

David Bradley returns as the first incarnation of the Doctor, along with companions Susan (Claudia Grant), Barbara Wright (Jemma Powell) and Ian Chesterton (Jamie Glover) in a pair of stories that take them from the sewers of a desperate planet to the great Globe itself, where rebellion is in the air! 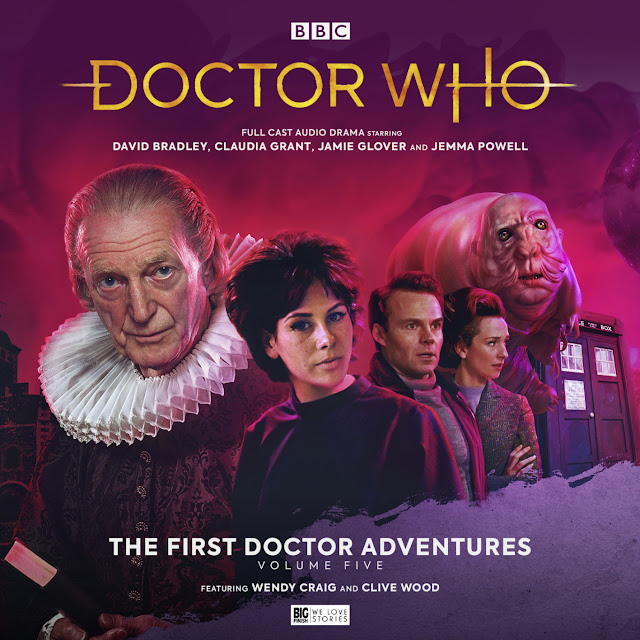 Doctor Who: The First Doctor Adventures – Volume 5 is now available as a collector's edition box set (on CD at £24.99) and as a digital download (at £19.99), exclusively from www.bigfinish.com.

The two TARDIS tales are as follows:

For the Glory of Urth by Guy Adams

The TARDIS has barely landed in an alien sewer when a distant scream sends Susan racing to give aid, and the crew split up.

Trying to reunite, the travellers find themselves in something resembling a monastery led by a man half-way between an Abbot and a warlord. They discover that they are in Urth, a barbaric place clinging on to its former glory.

It's somewhere its populace are never allowed to leave, somewhere keeping many secrets from its people.

And today those secrets will be revealed...

The Hollow Crown by Sarah Grochala

When the TARDIS lands in Shoreditch, 1601, the Doctor suggests going to see a play at the Globe Theatre and his friends readily agree.

But this is a turbulent time. There is violence in the street, plots against the Queen, and rebellion is in the air. At the centre of it all stands the most famous playwright in British history - William Shakespeare - who is having troubles of his own.

As tensions mount and wheels turn within wheels, the travellers are about to discover if the play really is the thing...

Of writing The Hollow Crown, Sarah Grochala said: “I loved writing for [Shakespeare and Queen Elizabeth I], they’re two characters that I’m fascinated with! It was also interesting writing for them within the context of what other writers have done for Doctor Who. There is a nod to Elizabeth’s previous relationship with the Doctor and to the fact that Shakespeare has met the Doctor before. The First Doctor, however, looks very different to the Tenth Doctor so neither of them recognise this incarnation.”

Writer of For the Glory of Urth Guy Adams added: “When I’m writing for the First Doctor, the voice in my head is somewhere between William Hartnell and David Bradley. I find it very hard not to let my ears get a little bit infected by the performance, and David’s is brilliant – it’s his performance of the First Doctor as well as a beautiful channelling of William Hartnell.

“David’s a great actor, and great actors don’t just do impressions. They can’t – the quality will always shine through and it will become something more multi-layered and textured. Listen carefully and you will hear the delightful elements that are more Bradley than Hartnell.”

Doctor Who: The First Doctor Adventures – Volume 5 is now available exclusively from the Big Finish website.