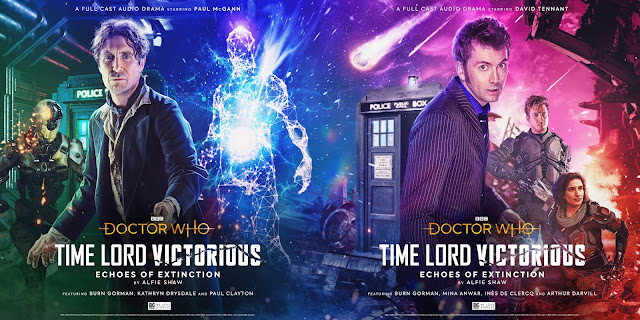 Echoes of Extinction comprises two separate adventures that listeners can play in any order and each features a different incarnation of the Doctor as they battle the dastardly Network (Torchwood’s Burn Gorman).

Doctor Who: Time Lord Victorious – Echoes of Extinction is now available as a digital download (at £8.99) at www.bigfinish.com.

Trapped, a haunted monster waits to consume new victims. It needs help. It needs a doctor. Unfortunately, it also needs to kill whoever it meets. Thrust into immediate danger, and on the back-foot, it will take all of the Doctor’s ingenuity to triumph.

Director Scott Handcock said: “Alfie Shaw’s done a brilliant job producing the audio adventures for Time Lord Victorious and his script for Echoes of Extinction is no exception. It’s a single story told from two perspectives, balancing two different Doctors, and introducing a host of fantastic guest stars. It’s great to hear David Tennant and Paul McGann tackle opposite aspects of one adventure, with Burn Gorman unifying the two strands as the menacing Network.”

Writer Alfie Shaw added: “I mean, getting to write for Paul McGann and David Tennant is a highlight in and of itself! It was a really interesting challenge to create two stories that had to be both self-contained and also add-up to a whole, and that was something that we worked hard to achieve. Plus, when you’re writing for two Doctors, there’s the opportunity to do a bit of a back and forth between them. I’ve previously written a story which was basically two Doctors proactively bickering, so I wanted to go with a different direction for this one.”