In a world still reeling from the effects of the pandemic, television Doctor Who has been cut back and fans who rely on the Beeb for their fix won't be getting a full season this year.

Big Finish, on the other hand, seem to have gone from strength to strength. Far from reducing their output due to the pandemic, remote home recording has kept actors and production teams running at maximum output.

Even with their Monthly Range of adventures coming to an end in March, it still feels like Big Finish are focusing yet still increasing their output to hungry fans.

But will the stories meet fan expectations? 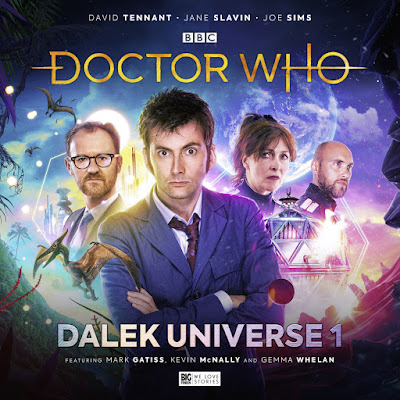 If Dalek Universe 1, a new boxset, the first of three, starring the ever popular David Tennant as the Tenth Doctor is anything to go by, your hunger for new Doctor Who is going to be regularly satisfied!

With companions Anya Kingdom, played by Jane Slavin, and Mark Seven played by Tennant's fellow Broadchurch star Joe Sims, the stage is set for an epic adventure for the ages. With nods to the past Tenth Doctor era and the ancient past with many elements from Terry Nations Dalek universe canvas, fans will be salivating for more.

But what of the casual listener who rarely, if ever, dips into audio?

Although a 3-part set, it would be handy to hear the prequel story, The Dalek Protocol starring Tom Baker as the fourth Doctor with Slavin and Sims. But it's not vital to the enjoyment of Dalek Universe 1.

Tennant feels as though he has never left the role and writer of the first two episodes, John Dorney, has captured his era perfectly. It's a sentimental banquet for anyone who was watching the show in the mid-noughties. The dialogue is delivered to perfection and it's difficult to believe that this cast was recording remotely from their laundry or clothes cupboards.

As the mystery unfolds in the first episode, "Buying Time", we are submersed into the mystery of a tenth Doctor thrown into an adventure without his TARDIS, and meeting characters he knows from a much earlier incarnation. We're also introduced to a character played by Mark Gatiss, who has appeared several times in different roles in TV Doctor Who and on audio.

But hold your horses folks. Any belief that you're in for a typical run of the mill story will be dashed as we are treated to a cliff-hanger for the ages that will blow your mind and force you to listen to the second episode immediately.

"The Wrong Woman" continues on from the previous story, but not in the way you were expecting. If you've had time to recover your wits from the insane cliffhanger, the ride is far from over as you take a timey-wimey roller-coaster ride that doesn't let up until the end.

Andrew Smith takes writing duties for the third episode, "The House of Kingdom", a fascinating look into some more of Anya's backstory and a return for more of the creations of Terry Nation's universe from the 60's, including the Mechanoids, which always had the potential to be much more than that single episode in 1965.

Despite the stress of lockdown, Ken Bentley has done a superb job directing this set. I suspect, however, that Ken would say his job was made easy by the extraordinary cast led by Tennant.

If all the above ingredients were enough to set my imagination ablaze, it was Howard Carter's incredible score and sound design that officially blew my mind! Howard's work was a standout for me in last year's "Return To Skaro", and this set proves his versatility and adaptability when it comes to different ranges and settings. Incredible stuff!

The main question on my mind after hearing this set?

How am I going to bear the 3 month wait until the next set is released in July?

Get Dalek Universe 1 today from bigfinish.com.