Peter Davison set to return as the Fifth Doctor in a brand new box set of audio adventures due for release later this year.

Doctor Who – The Fifth Doctor Adventures: The Lost Resort and Other Stories reunites the Doctor with his companions (last heard in the 2020 Monthly Adventure release, Madquake), Tegan, Nyssa, Marc, and... 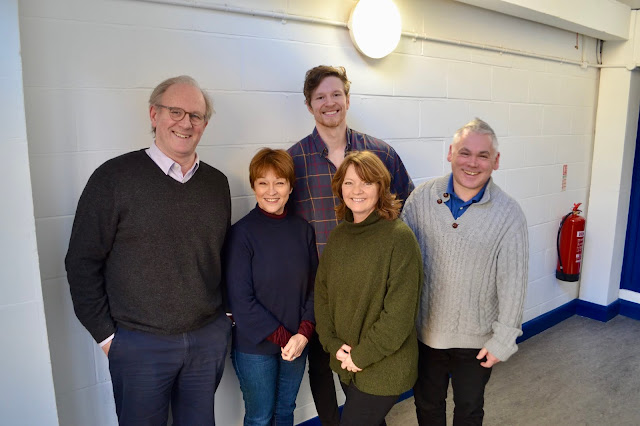 Peter Davison stars alongside Janet Fielding, Sarah Sutton and George Watkins, with a special appearance by Matthew Waterhouse in the first of three full-cast audio dramas which make up the box set.

Doctor Who – The Fifth Doctor Adventures: The Lost Resort and Other Stories is now available to pre-order as a collector's edition 4-CD box set (at £22.99) or digital download (at £19.99) at www.bigfinish.com.

The three thrilling adventures are as follows:

The Lost Resort by AK Benedict

Reunited with his companions, the Doctor’s plans to travel home to Gallifrey are cast aside when the TARDIS materialises on the Soresia: a planetoid with an unusual temporal atmosphere, home to the Welkin Sanatorium; seemingly an ideal place to recuperate. But the patients – like the Sanatorium – are mere shadows of their former selves. Decay has taken hold... yet their secrets remain as strong and healthy as ever.

The Perils of Nellie Bly by Sarah Ward

When the TARDIS crew arrive on the RMS Oceanic, they meet notorious journalist Nellie Bly on the final leg of her voyage to travel the world in less than eighty days. But with a saboteur on board, the Doctor and his friends must race to help Nellie reach her destination – and save her future.

Nightmare of the Daleks by Martyn Waites

Deep within a drilling rig on planet XB93, its crew has been suffering nightmares: dreams of cold, metallic creatures, stalking them through the base, killing them as they sleep. Fortunately for the crew, the Daleks’ own worst nightmare has just arrived – and he goes by the name of the Doctor.

Producer and Director Scott Handcock said: “It’s been lovely having an opportunity to introduce a new companion to the Fifth Doctor’s era. George Watkins instantly slipped into the dynamic between Peter, Sarah and Janet and it gave us the chance to explore some new sides to the characters.

“Part of their storyline was dealing with the introduction of a new crew member so soon after the death of Adric – and now they’re coming face to face with him on the planet Soresia, a planet where ghosts aren’t exactly laid to rest. It’s a lovely four-part story from AK Benedict, paired with a double-bill of two-parters from Sarah Ward and Martyn Waites as we meet journalist Nellie Bly on her around-the-world voyage, then travel to an industrial future where the Doctor’s most deadly enemies are invading people’s nightmares.”

Doctor Who – The Fifth Doctor Adventures: The Lost Resort and Other Stories is now available to pre-order as a collector's edition 4-CD box set (at £22.99) or digital download (at £19.99), exclusively from the Big Finish website.