The power is on and the Daleks are coming for the Fourth Doctor in Doctor Who – The Dalek Protocol, which sets the scene for this month’s epic Dalek Universe adventures. 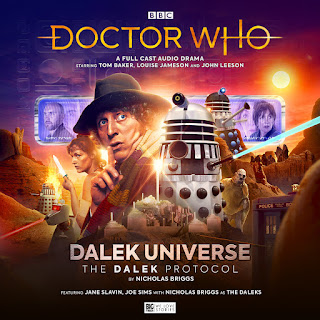 Released today from Big Finish, this four-part adventure features the Fourth Doctor (Tom Baker), Leela (Louise Jameson) and K9 (John Leeson) as they are stranded on the parrinium planet, Exxilon – which also happens to be where the Daleks are headed...

The tale also features Anya Kingdom (Jane Slavin) and Mark Seven (Joe Sims), as we meet them before the events of Dalek Universe. 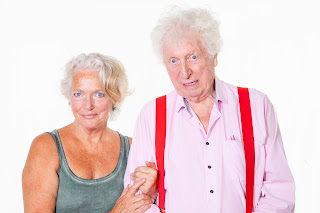 Doctor Who – The Fourth Doctor Adventures: The Dalek Protocol is now available as a collector's edition box set (on CD at £14.99) and as a digital download (at £12.99), exclusively from www.bigfinish.com.

The Earth mission to Exxilon is nearing completion after many long years. Enough parrinium has been mined to stop the spread of the deadly space plague. But suddenly, the power-draining beacon from the Exxilon city is inexplicably reactivated, stranding the humans.

The Doctor, Leela and K9 are stuck too, right on top of the remains of the city – under attack!

Somewhere nearby, the android agent Mark Seven is enacting his secret orders while the Doctor’s estranged future companion, Anya Kingdom, is hoping for redemption.

And heading inexorably towards them all… the Daleks!

The cast is completed by Jez Fielder (Dalek Empire, The Prisoner) Anna Mitcham (Doctor Who: The Monthly Adventures) and Nicholas Briggs as the Daleks. 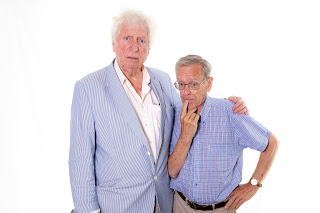 Producer David Richardson said: “The Dalek Protocol is an exciting sequel to Death to the Daleks. It’s also a launching pad for our Dalek Universe series – presenting Terry Nation’s thrilling world of the battle between the Space Security Service and the Daleks. One that the Tenth Doctor will soon find himself mysteriously thrown into… But, for now, it’s his fourth incarnation facing up to his oldest foes, accompanied by Leela and K9, and watched from afar by Anya, a companion who left him long ago – and, for him, yet to arrive in his life...”

Writer and director Nicholas Briggs added: “The Dalek Protocol sets up the relationship between Anya Kingdom and Mark Seven, essentially. And they work really well together. It’s a nice vibe.”

“It’s a story that’s very much in two parts (even though it’s a four-parter). Some of the story is on a spaceship, heading into danger. The other part is on Exxilon with an old friend of the Doctor’s and a new enemy for him too. But there are plenty of Daleks as well!”

Doctor Who – The Fourth Doctor Adventures: The Dalek Protocol is now available as a collector's edition box set (on CD at £14.99) and as a digital download (at £12.99), exclusively from the Big Finish website.