The Mutant Phase by Nicholas Briggs 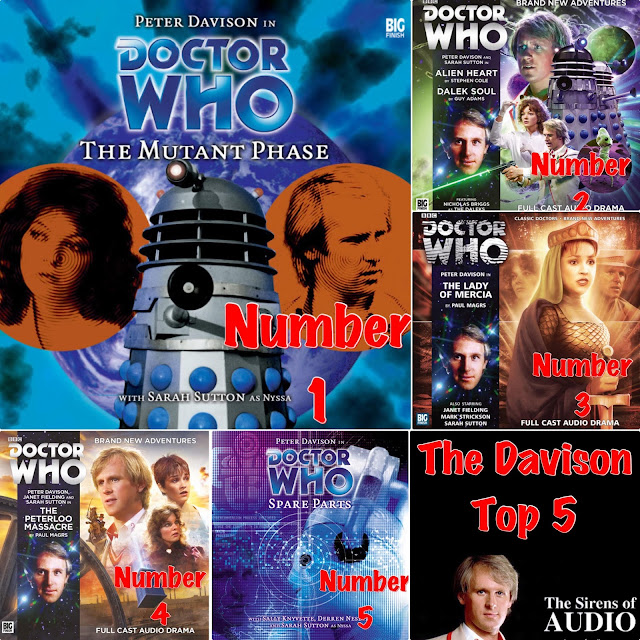 And so finally we come to the winning audio of the Radio Times Poll for the 5th Doctor. This is the audio that beat all other Peter Davison stories to be crowned at number 1. For many people, this seemed like a bit of a strange choice. For Big Finish fans, received wisdom is that Spare Parts is the number one story. But this poll was much broader in scope and reached a lot more people than just the Big Finish fans.  So what is it about The Mutant Phase that led to it winning the number one spot?

Firstly, and most importantly, it is a terrific story. Nicholas Briggs has pulled out all the stops for this adventure and flips the listener backwards and forwards in time using various means. The characters are well drawn and there is a great twist with one of the characters which although flagged for the listener the complications that happen for him towards the end are both serious and comical.

The second reason this audio is a hit is it is the Daleks. This is only the third Dalek story that was produced by Big Finish and it was the first story to feature Peter Davison. It is also the first time that Nyssa encounters the Daleks so there is a lot of interest as she discovers how ruthless they can be. And although this is an original Dalek story it is also a prequel to The Dalek Invasion of Earth. So here we have Daleks who are yet to encounter the Doctor or the TARDIS and know nothing of the threat the Doctor can be. This creates a bit of nostalgia for the lover of the television show.

Another reason why this is brilliant is Nicholas Briggs. No one has greater passion or love for the Daleks than Nick and that shines forth in this production. And all the more so because the stamp of Briggs is on every part of the story. As writer, director, composer, sound designer, is there nothing this man can’t do? So, for some fans who get jealous this can be a drawback. For people who love one powerful vision driving through a story that is what they get here. The music cues are very Briggsy as are a lot of the plotting themes that come up. But the reality is that they work and you can see the embryo forming that indicates where a lot of Nick's writing will develop from this point.

Ultimately, this story won the poll because of Peter Davison. People were voting on the best Davison story and what has happened is people have voted on the best Davision. In this performance we see a master class in acting. Davison nails every emotion, every bit of timing, every joke perfectly. He uses silence powerfully so that we can feel the confusion in the Doctor’s mind. He uses humour to unsettle and provoke. Confusion, trepidation and anger are also part of his vocabulary. This story allows Davison to shine across all levels of his acting ability.

The Mutant Phase is a great Doctor Who audio. It tells a fast pace story, across the lightyears and the centuries. It introduces us to a range of interesting characters and the Doctor and Nyssa work perfectly in sync. Well worth a re-listen to see why the majority of those voting in the poll chose this as number one.