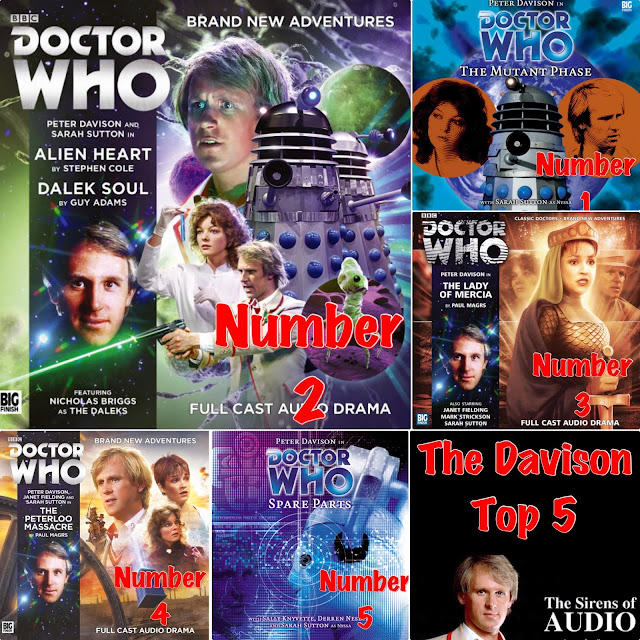 Number two in the Radio Times poll is not one but two stories from two very accomplished writers. Alien Heart/Dalek Soul are two separate and yet strongly linked tales that push the Doctor and Nyssa to new levels.

When Big Finish started producing audios I was very in line with fandom who felt that a Doctor Who story should be four episodes long with the three cliff hangers. Over the twenty or more years of listening though, the structure of what television and how story telling works have changed. The stories I enjoy most have become the 50 minute stories that are contained in the box sets, often with an overarching theme, in a style that more closely resembles the look and feel of the show since it came back in 2005.

On the whole the main range has maintained the original pattern of four episode adventures, though along the way there have been attempts at different forms of story telling. The three episode story with a one part story was trialed for a while. But here we have two, two episode stories and they work magnificently.

Alien Heart by Stephen Cole kicks off the set with a mystery. A range of planets have been destroyed and what is to become with the next in line. The Doctor and Nyssa arrive to try and work out what has happened. Separating the Doctor and companion is a staple of Doctor Who but never before has a companion been forced apart on the backs of thousands of stampeding spiders. Now on separate planets the Doctor and Nyssa must work apart to save a planet of people who know nothing of space travel.

Billed as two separate stories I was not expecting the appearance of the Daleks in the first story. On reflection, it should have been obvious that the race who would be destroying planets needed to be powerful but the clues were leading the audience to believe something different. Mind you the reasoning behind what was going on was even more unusual. Just as you feel the first story is wrapping up it takes a sudden left turn and ends with a cliff-hanger.

Dalek Soul by Guys Adams is brilliant! Not at all what is expected and is able to stretch the acting muscles of both Peter Davison and Sarah Sutton. Neither seem to be behaving as you would expect and as the story progresses the gulf between what you would expect and what is happening grows wider and wider. The final reveal is a wonderful twist.

When I first listened to this story four years ago I remember that I enjoyed it. But with the output of Big Finish being so great this is the first time I have gone back to listen to it again and it really is brilliant. Had it been one of the early releases I probably would have heard it ten times by now like I have with many of those first 50 releases. And if I had done that I think it would have been embedded in my mind as one of the best stories.

This set of two stories wouldn’t have been what I would have chosen as my Number 2 based on my memory. But having listened again I can see why it is appealing to others. Two tight, fast paced stories. A very dark and foreboding tale. Davison and Sutton acting their socks off and getting to play against type. Excellent direction by Ken Bentley with fabulous, loud sound design. And Daleks! What is it about the Daleks that appeal so much to people almost 60 years after their creation? Well whatever it is, it also helped the Number 1 story get over the line – but that’s for another review.