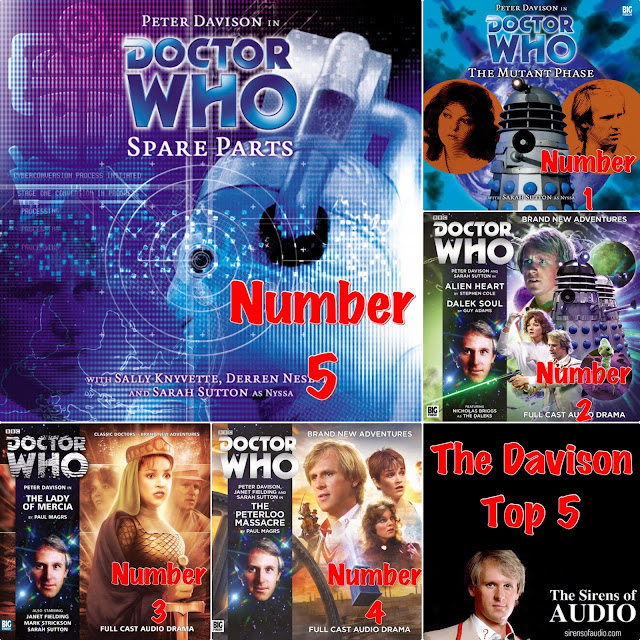 Ask any group of Big Finish fans what is the best story Big Finish has released and one that will keep being repeated over and over is Spare Parts. It is so good that it is one of only two stories that Russell T Davies had adapted for new Who when he became show runner, although admittedly, it is barely recognisable in the finished product.

It is no doubt with some surprise that Spare Parts only ranked number five in the 5th Doctor Poll conducted by Radio Times. A travesty? Well, many would argue that fifth place is still a strong finish. Big Finish fans may assess it should have been number one, but are there reasons that the thousands who voted, many of whom are outside the general Big Finish fan circles, didn’t place it number one?

So firstly, why is it so loved by the Big Finish family?

Well it’s an origin story. It’s Genesis of the Daleks but for Cybermen. It’s what the keen Doctor Who fans always wanted. The story of Mondas and the reason why a race of humans would let themselves become emotionless monsters. This alone makes the story extremely popular.

Mind you it is a story that is told particularly well. Marc Platt who wrote one story for the classic series, Ghostlight, and was one of the few authors who transitioned from classic who, to novels to Big Finish. His writing is always distinctive, slightly kooky, exploring complex themes and often told in convoluted ways. Having written over twenty stories now for Big Finish, this was only his second venture following the successful Loups-Garoux. Marc manages to create an epic story, of a planet slowly surrendering itself to its fate through the eyes of a single family. This family mirror the values, the fears and the destruction of all Mondasians.

The Hartley family are so effective in conveying the decay of society and brilliantly realised by great, naturalistic acting of Paul Copley as Dad, trying to hold what is left of his family together, Jim Hartley as Frank, headstrong son who is convinced he knows best and Kathryn Guck playing Yvonne who health slowly decays and finally creates one of the saddest scenes in the story. These three characters are the voice pieces of the different elements of the Mondas society showing us their values, their hopes and their fears. The normality of the family is contrasted by the unusual Sisterman Constant as played by Pamela Binns. Every story needs a villain, and Constant provides that role. Though as the story progresses you realise that she is just as deceived and lost as the other poor souls on the planet.

Star casting goes to Sally Knyvette, best known to Blake’s 7 fans as Jenna Stanis, who plays the creator of the Cybermen, Doctorman Allen. But unlike the evil creator of the Daleks, Davros, Allen is naïve rather than evil. Her desire is to save her race but through her trials and experiments she condemns her people and herself to emotionless slavery and begins to be a scourge on all of the universe.

Peter Davison and Sarah Sutton make the perfect pairing for this adventure. Both this incarnation of the Doctor and Nyssa has such vulnerable sides to their characters and a desire to help, that as options are removed from their hands you see their hopelessness of the growing situation. Nyssa’s closeness to the Hartley family leads her to suffer great grief, especially with the fate of her friend Yvonne.

And so the Cybermen. Nicholas Briggs brings us another star turn and demonstrates why, when the Cyberman return to the new series of Doctor Who, he is the only one who could bring them back. This time realising the high pitched, sing song Mondasian Cybermen first encountered in the Tenth Planet. He plays various roles that become more menacing and finally take over from the humans who they originally were. But like Tenth Planet, the lead Cyberman still has a name, Zheng, betraying his human roots.

So, there is much to love about this story. But the reason why so many fans love it may also be the reason it didn’t make number one in the poll. It is dark. Very dark. It is more of a political thriller than an action adventure. There are no huge battles and there is no evil villain. And throughout the story is total foreboding. It has a huge downbeat ending, so loved by fans but not so much by the general public. And also Cyberman aren’t Daleks. And when it comes to the battle between Cyberman and Daleks and what people love – Daleks win.

So Spare Parts is number 5 on the list. Does that change how great it is? Or how fans will view it? No way. But it does let a couple of other great stories get noticed that hadn’t been recognised by fans before. For many I think Spare Parts will still be viewed as the best that Davison has to offer.