The second in the Out Of Time trilogy from Big Finish, The Gates of Hell is OUT NOW.

In the dark Catacombs of Paris lurk the Cybermen, in a classy upgrade from the sewers of London, and will be pitted against not one Doctor but two in a timey-whimey tale of classic proportions. 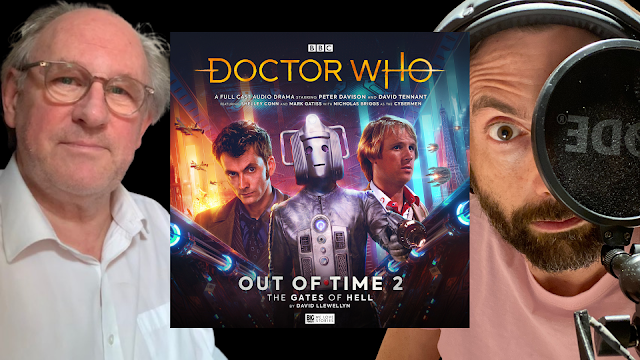 Joining Davison and Tennant in the cast are Mark Gatiss (Sherlock, Dracula) as Joseph Delon, Shelley Conn (Terra Nova, Liar) as Tina Drake and Nicholas Briggs as the Cybermen.

Paris, 1809. The Fifth Doctor takes a tour of the Catacombs and meets a sassy Time Agent doing the same…

Paris, 1944. The Tenth Doctor misses his target and lands in occupied France. He hides from the Nazis – in the Catacombs.

A collision of two Doctors’ timelines triggers a temporal catastrophe, granting the Cybermen dominion over the Earth.

Producer David Richardson said: “The Gates of Hell is really lovely stuff. It features a smashing script from David Llewellyn that shows these two Doctors at their very best, saving the universe together while facing one of their oldest foes. If Children in Need’s Time Crash left you wanting more, then here it is!”

Writer David Llewellyn added: “It’s probably a bit of a cliché, but this was ‘dream come true’ stuff. One of my earliest television memories is Peter Davison pushing a Dalek out of a first floor window on Shad Thames, so he always felt like my Doctor, and I welled up a bit when the Tenth Doctor said the same thing in Time Crash.”

“My brief was simple, just the basic ingredients, and they were all amazing. Fifth Doctor, Tenth Doctor, Cybermen. I mean, really. It was like Christmas!”

Doctor Who – Out of Time 2: The Gates of Hell is now available exclusively from the Big Finish website.