It's time to explore once again the world of Kaldor, first introduced to us in the 1977 Doctor Who story, The Robots of Death. 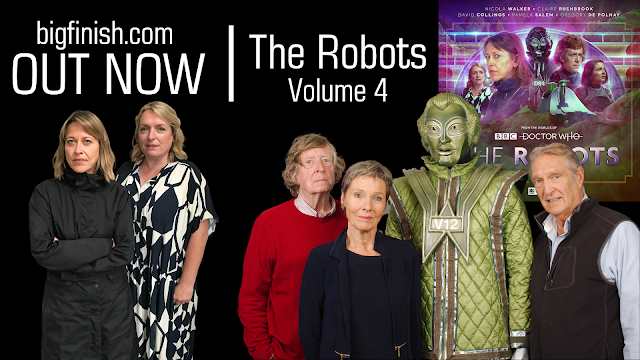 Not only do we have stories featuring returning actors and characters from The Robots of Death, David Collings (in his final role before he passed away) and Pamela Salem, we see the return of the hauntingly familiar Gregory de Polnay as D84.

Writer of box set opener Closed Loop Guy Adams said: “David Collings is a proper hero of mine, one of my favourite voices – it was a huge thing for me to be able to write for him, and it’s a proper loss that he’s gone. I pitched the story idea and John suggested that Gregory de Polnay could be involved, and it went from having Poul haunted by A robot to THE robot. It’s a very specific ghost from his past – it’s kill or cure, coming face to plastic once more. Or not... you’ll find out by the end of it all!”

Writer of Off Grid Sarah Grochala said: “As a female writer, it’s really exciting to be part of a series that is so female-led, particularly one that is thinking about technology as people tend to think of it as a male dominated field."

“I love Liv’s passion and determination to get to the bottom of everything. And Tula’s fascinating because she’s deeply committed to her work but is having to come to terms with some of the Company’s more dubious practices. She’s a scientist, but she’s also an artist in terms of her approach and commitment to the robots she creates.”

Writer of final story The Janus Deception Robert Whitelock added: “Writing for Liv and Tula is pure joy. I know Nicola and Claire well from acting with them, and now when writing for them I can hear their character’s voices really clearly in my head as I create the dialogue.”

The Robots: Volume 4 is now available from www.bigfinish.com