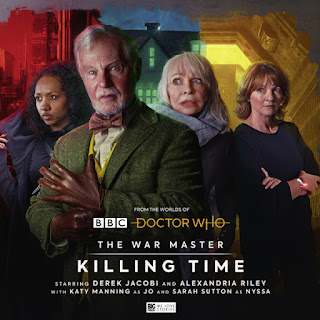 The Doctor, when confronting the master in The Deadly Assassin says to the Master “You would delay an execution to pull the wings off a fly”. In this box set we see what activities the Master does get up to while just killing time. And it is far more cruel, and equally as unnecessary, as pulling the wings off a fly.

Shout out to Rob Harvey. He has composed the most effective scores for The Orphan in The War Master Box set “Killing Time” used for a very long time. The power of the piano, leitmotifs and minor chords is palpable. Although not intrusive, the music acts as a third character driving the emotion.

Musical score by is one of the emotive created for a long time. Particularly in The Orphan. The use of piano chords adds to the loneliness and seclusion.