Linda Thorson is BACK in the World of The Avengers

There’s espionage aplenty in the new series of The Avengers, as legendary actress Linda Thorson returns to the series in a brand-new role.

Released today from Big Finish, Julian Wadham is back as spy-about-town John Steed alongside Emily Woodward as his trusty sidekick, Tara King, who was originally played in the 1960s TV series by Linda Thorson. These four brand new, full-cast audio adventures are adapted from The Avengers comic strips originally published in TV Comic.

The four fables in this fantastic volume are as follows:

Whatever Next? By John Dorney

After an eccentric scientist correctly predicts an imminent asteroid collision, John Steed and Tara King are dispatched to uncover the basis of his precognitive powers. The answer is stranger than they could possibly have expected...

How Does Your Garden Grow? By Dan Starkey

When the plants around an Air Force base grow to prodigious proportions over-night, an explanation is required. The trail leads to an out of the way farm and a potential scientific break-through - but there might just be a snake in the grass...

Steed and King are summoned to investigate a most unusual robbery - where the robbers don’t seem to have been interested in taking the money. How does the mystery tie in to a local Civil War reenactment society?

Mother has been called back to his Alma mater to present the school prizes - but someone doesn’t want him to survive the ceremony. It’s down to Steed and King to go undercover and stop the assassins from spoiling the day...

Of working with Linda Thorson, actress Emily Woodward said: “She’s just the loveliest lady – so generous with her time, she’s interesting and very complimentary – any kind of fears I had were completely burst because she was just fab!”

“Recording these adventures is never a chore, always a joy, with the added fact of meeting the real Tara King which has been amazing!” 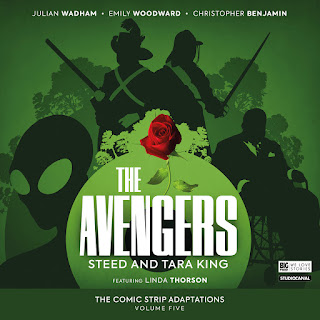 Actor Julian Wadham added: “I came in a bit later than the other actors, so the girls had already had a chance to establish their relationship, and I could hear immediately Linda’s special affection for Emily and how relaxed and easy it was between them, with such a sense of the fun!”

“The Avengers is always a pleasure – it’s just one of those jobs which is relaxed, fun and playful, so I always look forward to it!”

Actress Linda Thorson added: “The back-and-forth between Tara and Steed is there wonderfully in these scripts. I’m thrilled to be a part of it. What a wonderful thing that this classic series has this new life with these wonderful actors, Julian Wadham and Emily Woodward.”

Producer David Richardson said: “Picture this: there I was booking Emily for the recording days, and her lovely agent Phil just happened to say, ‘I also represent Linda Thorson, I’m sure she’d love to do one of these.’ I could not reply fast enough! And so thanks to Phil, Linda is our guest star in the episode Mother’s Day, and what an utter joy she is to work with.

“She was so delighted to be acting with Julian and Emily (she’s been a friend of Emily’s mum Michelle Dotrice for many years), and she kept us laughing and shared many stories of her time on the TV series. What a legend – I’d love to work with her again.”

The Avengers – The Comic Strip Adaptations Volume 05: Steed & Tara King is now available as a collector’s edition four-disc box set or digital download, exclusively from the Big Finish website. Big Finish listeners can save money by purchasing volumes 3-5 together as a single bundle.