A Welcome Return to the Ninth Doctor's Adventures

In one of the most anticipated releases of the year, Christopher Eccleston returns to Doctor Who in the role that brought the ongoing story to the small screen back in 2005.

And boy, what a welcome distraction this is, considering the current climate in fandom right now.

Speculation was rife when it was first announced as to when this might be set in the Ninth Doctor's timeline. Would it be set before Rose? Would Billie Piper be returning as well?

It became known early on that Rose would not be featured in the set. So now, with the release of Doctor Who - The Ninth Doctor Adventures - Ravagers, we enter a whole new era of unexplored Ninth Doctor stories, under the pen of Big Finish's Creative Director, Nicholas Briggs. 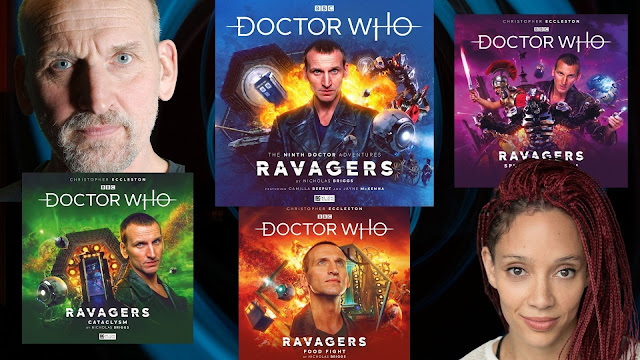 There are three stories in the set and it features new companion Nova (Camilla Beeput) and mystery character Audrey (Jayne McKenna).

On returning to the role, Christopher Eccelston said, “I've really enjoyed playing the Doctor again. As I've always said, he was always a joy to play. Somebody with that amount of optimism, enthusiasm and brains and heart – two hearts! It's not something you get to do often.”

On the Sphere of Freedom, the Doctor is about to shut down an evil Immersive Games business empire. He’s assisted by a valiant galley chef called Nova. But his plan spectacularly fails...

Now, the Doctor must fight back to discover what could have caused everything to go so badly wrong. His journey takes him via Piccadilly Circus in 1959, Belgium 1815 and far flung future worlds where machine intelligences regard sentient life as mere biofuel.

Where does the mysterious old-timer Audrey fit in? Is the alien beverage Charganzi safe to drink? And is there really anything the Doctor can do to stop the entire universe from being devoured?

Producer David Richardson said: “To think, sixteen years ago the Ninth Doctor reached out, grabbed Rose Tyler by the hand and told her to run off into new adventures. And now he’s back, grabbing us all by the hand and leading us off to whole new worlds, new friends and new foes. It’s Saturday teatime 2005 all over again… and it’s wonderful to have him back.”

Doctor Who: The Ravagers is available now from www.bigfinish.com