The Peterloo Massacre by Paul Magrs 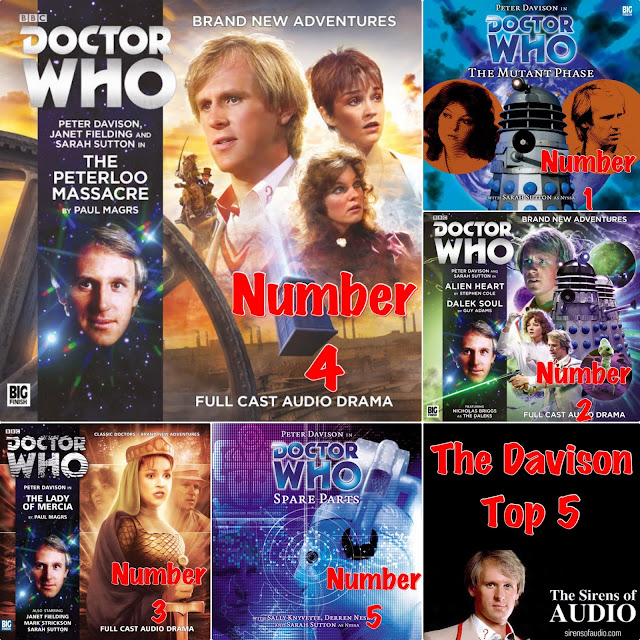 Number four in the Radio Times poll at first glance seems an unusual story for so high a position. The Peterloo Massacre is a “pure” historical and places our heroes in a time and place of great danger, except no one really realises what is coming except the Doctor.

Aside from William Hartnell’s Doctor, no other regeneration has had the opportunity, nor fit the bill so well as to play historical stories, as Peter Davison. His charm and innocence lend itself well with blending into history and playing as small a role as possible. His was the first Doctor to get a historical to play on television with Black Orchid since The Highlanders. And never again on the TV show would there be an historical. His Doctor also had had other successful historicals at Big Finish such as Eye of the Scorpion, The Church and the Crown and the Council of Nicaea.

So what is a pure historical? In fan talk it is a story that features no science fiction elements at all – simply the TARDIS used as a device to deliver the Doctor and his companions to the scene and then not used again.

So why do historicals work so well? It’s all about inevitability. With a story set in the future the outcome is unknown. But when a story is grounded in history the events are going to unfold in a certain way and the conclusion can not be escaped.

The other reason that historicals work so well is that they give people a passion for history. Many a period of history has been studied because of Doctor Who. From the Aztecs, to Pompei,  the French Revolution, the Gunfight at the OK Coral to the history of Rosa Parkes.

The Peterloo Massacre in Manchester was something I knew nothing about. But after listening to this story I wanted to do some research and discovered what a major event it was. Paul Magrs has written a very tight script and managed to create from a handful of characters the many voices needed to represent the different points of view that caused the disaster. From the wealthy, the militia, the workers, the protesters. Conflict was inevitable. But the scale of the massacre was truly dreadful to ensure the power and the wealth of the rich.

Paul says of his own story, “It’s a story about terrible unfairness and social injustice. It’s about hope and bravery being trampled into nothing by greed and prejudice, snobbery and hatred. And it’s about how hope can survive such terrible events.”

Director Jamie Anderson has managed to pull together an exceptional cast with very different vocal qualities. In some ways their accents show what role they are destined to play in the approaching drama. Jayne Standing in particular does an excellent job of creating pathos and emotion in her one and only Big Finish outing to date.

The strength of the guest cast allows the regulars to truly shine. Peter Davison gives an outstanding performance. Enthusiastic at first leading to realisation and deep sadness. He knows that he can’t change history but you can hear in his performance the desire to stop the inevitable. Janet Fielding plays the brashness of Tegan to great effect. Her no nonsense character fits in well with the situation and her desire to not allow the course of history to run smooth is clear. Sarah plays the hope of Nyssa with great effect. Strength through gentleness abounds and she reflects that character of the Doctor perfectly.

Although The Peterloo Massacre would not have occurred to me as being one of Davisons top 5 stories, on re-listen I can understand why so many people enjoy it. It shows social conscience, it allows Peter Davison to inhabit all the of best characteristics of the 5th Doctor, it teachers history, it has a huge action scene and it reminds us there can be a better way. What more could you ask of a Doctor Who story?