The Lady of Merica by Paul Magrs 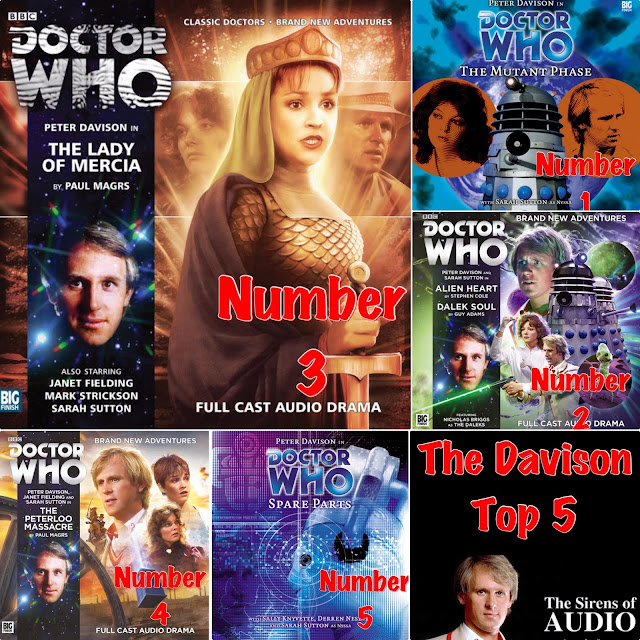 Number three in the Radio Times poll and the second entry for writer Paul Magrs is The Lady of Mercia. Another historical story (kind of) it is certainly not the “pure” historical that The Peterloo Massacre was. Though as well as being similar in being a historical, it is also similar in terms of taking place in the North of England and also in exploring themes of social class and funding.

The Lady of Mercia is a story set in two time zones, though the time travel between the two is not the conventional one you might expect. The TARDIS crew landing at a university in the North in 1983 and pretend to be experts in the Middle Ages as they try and detect a time anomaly. This is created by a scientist who accidently sends Tegan and a colleague back in time. In typical historical romp they meet Queen Æthelfrid and her daughter Princess Ælfwynn and the Princess is then brought back to present time. But the Queen and Princess are due at York to maintain their power. Tegan has no choice but to take the role of Princess and become the Lady of Mercia.

The Lady of Mercia is not a complex story, in fact Sarah Sutton said she understood this one, which is a rare thing. But although simple it has a number of elements of suspense and action that allows characters to be developed and to shine. Though some of the romantic elements of the stories and the complexities within couples probably doesn’t have enough time to develop very realistically.

Though there is coupling a plenty, the most interesting relationship, and the one that develops the deepest is between Tegan and Queen Æthelfrid. This mother / daughter relationship grows throughout the story and so there is genuine sadness and loss when history does what history does and one of these characters meet their preordained fate. This is an excellent performance by Rachel Atkins and would be the first of more than 25 that she would bring to Big Finish. Janet Fielding plays off her perfectly and together there is real truth in their story telling.

Peter Davison and Sarah Sutton pair up for most of the adventure and all the required technobabble plays back and forth very naturally between them. As always there is genuine warmth between these characters and you can see why Nyssa is Davison’s favourite companion for his Doctor. In Big Finish terms this is the old Nyssa who is travelling with Tegan and Turlough again many years after she left the crew after the events on Terminus. But for this story that timeline doesn’t really matter.

Mark Strickson is sadly without much to do. Turlough remains relatively fixed in 1983 not really willing to put himself at risk. He does get some nice scenes to play off Abigall Thaw as Professor Phillipa Stone but neither character is taken as far as they could have been.

A small but impressive impact is made by Stephen Critchlow making his second of over 35 performances. His regular returns as an actor can be understood as you hear him play two very different but distinct characters in the story.

Special mention should be made of both director, Ken Bentley and sound design and music by Steve Foxon. With all the flipping between middle ages and 1983, this could have been extremely confusing, but there is never any doubt at all where we are. Before we hear a character speak we know where the scene is set but the sound design. Sometimes this is very subtle but it always works. There are also some mighty big battles created as well.

Although I wouldn’t count the Lady of Mercia as a classic it does do all it sets out to do and does it very well. Its and entertaining yarn, well acted, heart warming and is pointing you to a very large historical figure that we probably don’t know very well. With an excellent cast and great direction it is well worth a listen and re-listen.