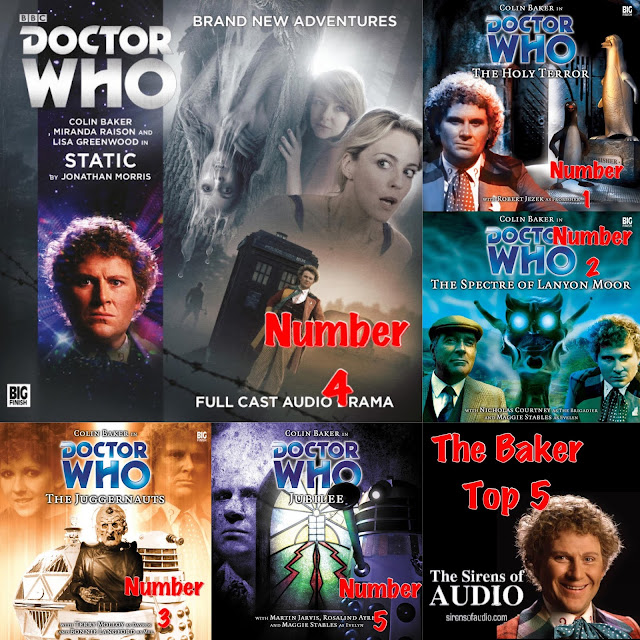 The most recently released story of the Colin Baker top 5 is Static by Jonathan Morris. Released three and a half years ago, it is a scary tale of dead bodies that go bump in the night and the mist and the voices the lurk in the static. It is a story that spans decades and yet takes place all at the same time. It’s a look at what would happen if you could bring back the dead.

Jonathan Morris is certainly one of Big Finish’s most prolific writers. With over one hundred stories in his catalogue spanning all the way back to Bloodtide, his stories have been inventive and diverse. He has written across every Big Finish range, for every Doctor and for many different pairings of Doctor and Companion. He has written a number of successful Colin Baker stories, especially with Flip. Many of his stories can show a dark sense of humour or like this story, create fear in uncertainty. He manages to twist something that we all experience every day - static - and make it an object of fear – the place where the enemy lurks.

Static is a more modern tale than the other stories in the top 5 and so Baker is equally supported in the story telling by Miranda Raison and Lisa Greenwood his two companions Mrs Constance Clarke and Flip. Although the Doctor has greater knowledge than his companions, he is very much equal with them in terms of narrative and key moments in the story. This does not make Bakers acting any less and he has some very powerful scenes in the last episode as he decides he is not going to allow what has happened continue to be. He also makes some morally questionable decisions and perhaps justifies them a bit too easily.

Flip is the easy to relate to character in the piece. She quickly befriends the other young members of the story and through her we see the backstory to what is occurring. We feel the sympathy for the situation that she feels but also her suspicion and distrust. Lisa Greenwood creates a very relaxed character in Flip which is in contrast to when she first began as a companion as she took a while to define who she was. But over the years, and particularly with her friendship with Constance, the character has begun to shine and from an initially spiky surface is now the heart and warmth of the crew.

Constance continues to be a rock in all situations. Her loyalty to the Doctor is unquestionable, being willing to die to achieve what he asks. As she and the Doctor return in time and into a Second World War setting, she is able to bring to the fore all her knowledge of protocol and behaviour to assist the Doctor to achieve his outcomes. Miranda Raison is an amazing actress and a stunning coup for Big Finish to get to work for them. It is to her credit that a character who could played by others come across as cold is someone we learn to care deeply about.

Jamie Anderson has pulled together a strong cast to play all the supporting roles. Voices are both modern for the recent times but also the correct RP for back during war times. David and Pippa make a convincing couple that are obviously struggling through grief. And Pippa and Jo make a strong sisterly connection. Scott Chambers is excellent in his role creating both fear and compassion depending on the circumstance.

Ultimately, Static is such an effective story because it blindsides the audience in the final episode. From the direction it appeared to be going for most of the story is suddenly veers left and heads you in a very different direction. It is only the fast thinking of the Doctor that saves the day – which is as it is meant to be.

Static would not have been in my list of the top 5 Colin Baker stories, but it has been good to go back and listen again and realise it is indeed a very worth while candidate due to its complexity, its ability to raise emotions and its use of time. If you are after a creepy story and a time old mystery, Static is a great place to start.