The Juggernauts by Scott Alan Woodard 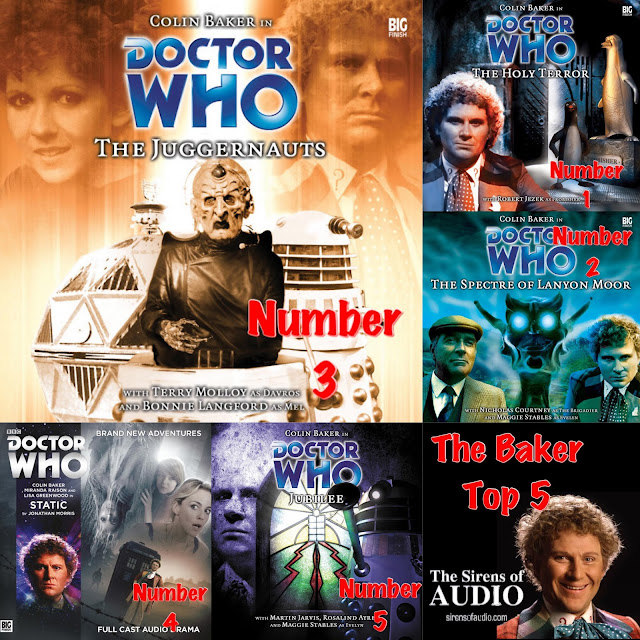 Third place in the Radio Times poll is another Dalek story. As with the Davison top 5 two Dalek stories make the top 5 with Colin Baker, continuing to show that the Daleks have not lost any popularity with the general public.

The Juggernauts was written by American writer Scott Alan Woodard who accepted the commission from Gary Russell with a huge shopping list – Colin, Bonnie, Davros, Daleks and Mechanoids. But even with this huge list, the story effortlessly combines all these iconic figures. And who wouldn’t want to play in that sandpit?

Although the plot does retread some familiar themes from some televised stories, this allows the audience to pick up quickly on cues and also allows the plot to move more swiftly. There are enough twists to keep engaging the listener and some stellar performances.

The Juggernauts well demonstrates the vision John Nathan-Turner had when he developed the character of Melanie Bush to become the 6th Doctor’s companion. This is only their second play together but the characters just spark and show a great deal of emotional intelligence with each other – even though they are separated for a large part of the story. Colin and Bonnie both show how talented they are having very strong scenes with the guest cast, showing a real depth they weren’t able to show on television. It is both great to see and sad to realise what could have been and what a lost  opportunity there was when Colin was removed. Together Colin’s Doctor is kinder and more considerate and Melanie is wiser and more independent. She is certainly not the screamer she was made into on TV.

Terry Molloy is a joy to have back behind the microphone. His first visit to Big Finish was also playing opposite Colin in the excellent story Davros. In that story they demonstrated what a powerful double act they were that is repeated well in Juggernauts. His initial scenes with Bonnie, which are friendly and jovial, before she discovers who he is, show just how talented he is as a voice artist. The fact that we can like him so much and then turn it so we hate him is very powerful. With every Davros story you are waiting for the one on one scene between Davros and the Doctor and Juggernaut does not disappoint. This confrontation is powerful as would be expected, but ultimately it is Melanie who wins out.

As always Nicholas Briggs does an excellent job with the Daleks, though his range is stretched by also performing the mechanoids. Props also to sound designer, Steve Foxon would have played a very large role in realising the mechanoid voices. But no amount of sound design can work without the prowess of the actor bringing the required performance.

The Juggernauts explores some deep themes of loss, love and the right to survive. It has suspense, action and a bit of horror. All up it is a great story to listen to.