REVIEW: Doctor Who - After The Daleks by Roland Moore 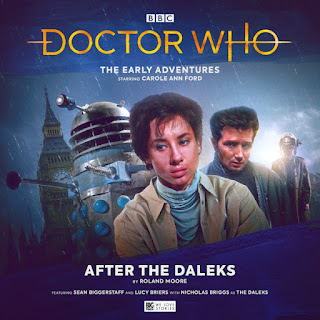 It has been debated over the years whether the Daleks are truly the most evil creatures in the galaxy or could it be that the humans who seek to use the Daleks to subjugate their other humans are far more evil?

This issue is examined in part in the engaging script “After the Daleks” by Roland Moore.

This story follows the aftermath of The Daleks Invasion of Earth. The Doctor in a romantic but nevertheless foolhardy action has deserted his granddaughter on a war-ravaged Earth with absolutely nothing, not even a pair of shoes.

Susan is forced to make the best of the situation and does at least have the beginning of a love match. But before that can blossom there is going to be a fight for survival. Can those that have survived the Daleks survive without technology? Can they learn to grow and harvest food to feed the masses? Can they re-establish a form of government that can fairly rule the people?

It is this political intrigue that forms the backbone to this story and Susan, at first unwilling, must step up into leadership roles or allow another, with the backing of a Dalek, to rule the planet.

Carole Ann Ford is excellent in this story bringing the youth, joy and fun of Susan and slowly developing the strength required to lead a planet. More Susan please! And it is lovely having  Sean Biggerstaff as David. We are use to Sean whopping up the comedy in the Jenny series but here he shows what a serious actor he can be. The rest of the ensemble are equally excellent bringing a real sense of threat and danger to the story. Lisa Bowerman as director doesn’t hold back any punches as she lets the darkness of the script bleed through.

After the Daleks is very “Survivors” in feel and I think Terry Nation would have been proud of the coming together in tone of his two shows.

One thing is certain. The early adventures have gone from strength to strength and really allow original cast members to show what great actor they are and what their character could have been.

Our guest this episode is lifelong Doctor Who fan, actor, writer, director and Executive Producer at Big Finish Productions, Nicholas Briggs. In part one of our detailed conversation, Nick speaks about his childhood and family, his involvement in organized fandom and playing the Doctor in the 80's for Audio Visuals, as well as how he deals with fan criticism.

Doctor Who - Creatures of Beauty - https://www.bigfinish.com/releases/v/doctor-who-creatures-of-beauty-210

REVIEW: Doctor Who - The Secrets of Det-Sen by Andy Frankham-Allen 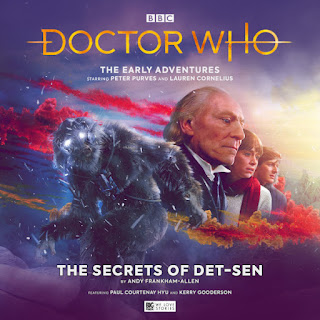 One of the great joys of the Early Adventures is hearing the original cast in all their glory. Peter Purves was just honoured during the Queens platinum celebration for his years of service and in this story we see how much he deserved that honour and how talented he still is.

A story contrivance in the second Doctor story “The Abominable Snowman” is the Doctor needed to return a holy relic to the monastery at Det-Sen which he had taken years earlier for its protection. That unknown adventure is brought to life by Big Finish in this prequel.

Writer, Andy Frankham-Allen is the creative director for the Haisman Estate who own the rights to the Great Intelligence and the Brigadier. Although his name appears in the production credits of a number of shows he has only written a couple of previous stories. But that doesn’t mean that this story isn’t terrific.

We might have expected a high octane action adventure, and although there is action, this is far more of a character piece. Actor Lauren Cornelius is first introduced to us as the recast Dodo and what a  splendid job she does. Dodo has been a bit maligned in fan history but there is nothing weak about this characterisation. Lauren plays beautifully off both Peter Purves’ Stephen and his charming Doctor. Although a small cast, everyone is performing great work and there

Is a real intimacy amongst the characters.

Director Lisa Bowerman as always gets the best from the cast and once again she uses the rhythm of speech to drive the action.

Most of the Abominable Snowman is missing presumed destroyed. But The Secrets of Det-Sen goes a little way towards reopening a part of the world that has been lost. It does it through great atmosphere and fun story telling.

This time we speak about two stories chosen for us at random by the Randomoid Selectortron, we discuss the recent announcements from Big Finish regarding price drops and increases, and we interview the writer of Moonflesh, Mark Morris.

Find out more about our feature releases:

Doctor Who: The Companion Chronicles - The Forbidden Time - https://www.bigfinish.com/releases/v/doctor-who-the-companion-chronicles-the-forbidden-time-497

The worlds of Blake’s 7 have captured the tone of the original show while delving more deeply into characters old and new. It is sometimes difficult to tell who are the heroes and who are the villains.

Olivia Poulet has re-created a character in Avalon, who we want to follow despite the morally ambiguity she displays. Her interactions with Colin Baker’s Bayban and Stephen Greif’s Travis are wonderful. More adventures for Avalon please.

Re-casting beloved Doctor Who characters for audio stories is a contentious issue for some fans. Our aim for this episode is to invite the doubters to at the very least, give them a try.

Our guest this time is Christopher Naylor, who plays fourth Doctor companion Harry Sullivan for Big Finish, and has appeared out of time in the U.N.I.T. Nemesis series.

We discuss his career, his other creative outlets such as art, and how he approaches the iconic role for audio. 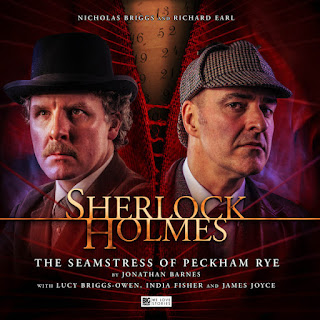 The Sherlock Holmes series keeps going from strength to strength and the only disappointment is how few stories are released each year.

Jonathan Barnes has proven himself to be the master detective writer as each new story he has written is more inventive and captivating than the previous one. The twists you never see coming even when signposted for you - and the character keep surprising you with their actions.

The support cast are exceptional and a who’s who of Big Finish. Lucy Briggs-Owen, Mark Elstob, India Fisher, James Joyce, Angela MacKintosh and Glen McCready. Together they have appeared in hundreds of stories and always rise to the occasion.

As always, however, kudos must be given to Nicholas Briggs and Richard Earl. They for me are now the definitive Holmes and Watson and everyone else is just a lesser copy. The angst and quiet desperation of Holmes is beautifully played and Watson rises to new heights as a man in love and defender of virtue.

Sound design by Benji Clifford is faultless and displays his high level of care and pedantry in all that he does and music by Jamie Robertson creates mood across the story.

As the winner of the 2022 Audie for excellence in performance, production and content there is little more that needs to be said. This has been judged the best audio of the year against every other release. So if you haven’t been swept away to Peckham Rye yet, what are you waiting for?